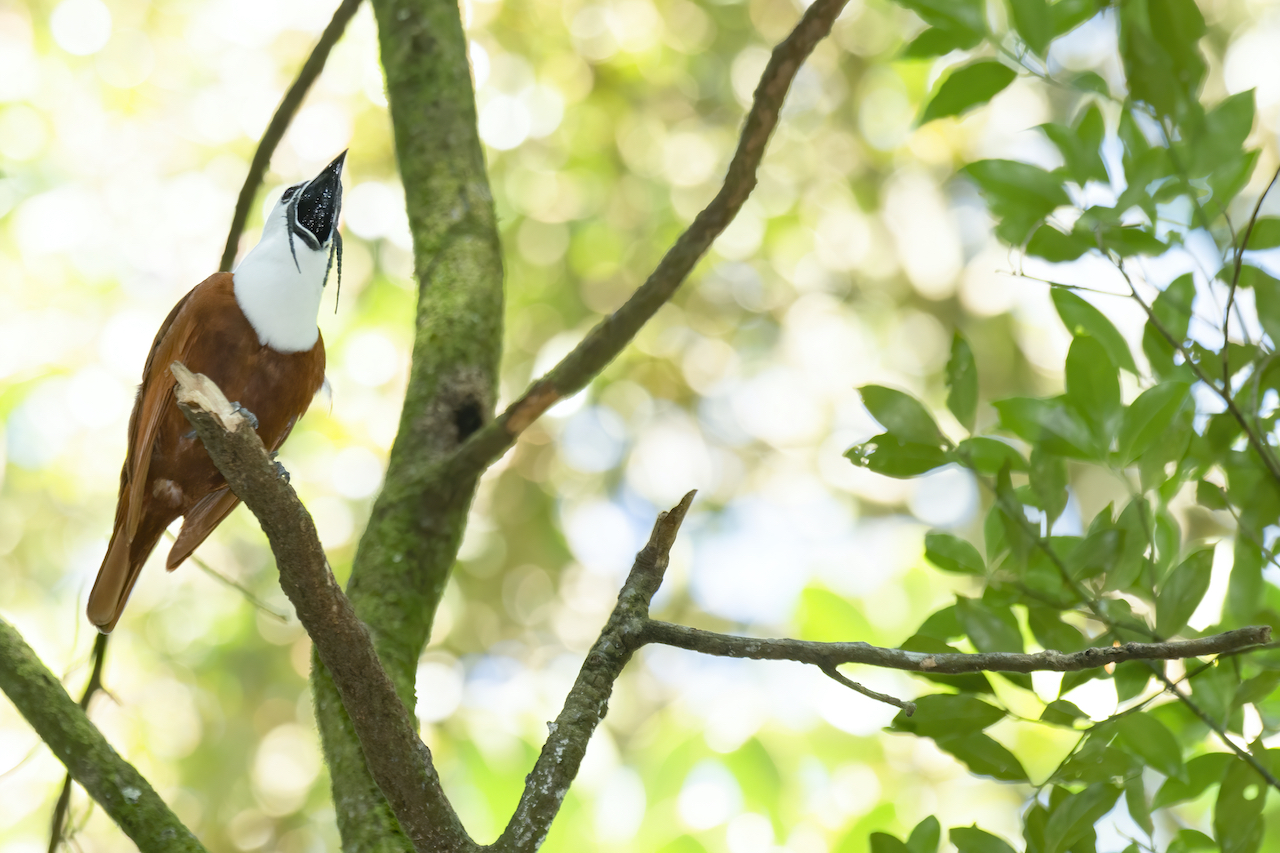 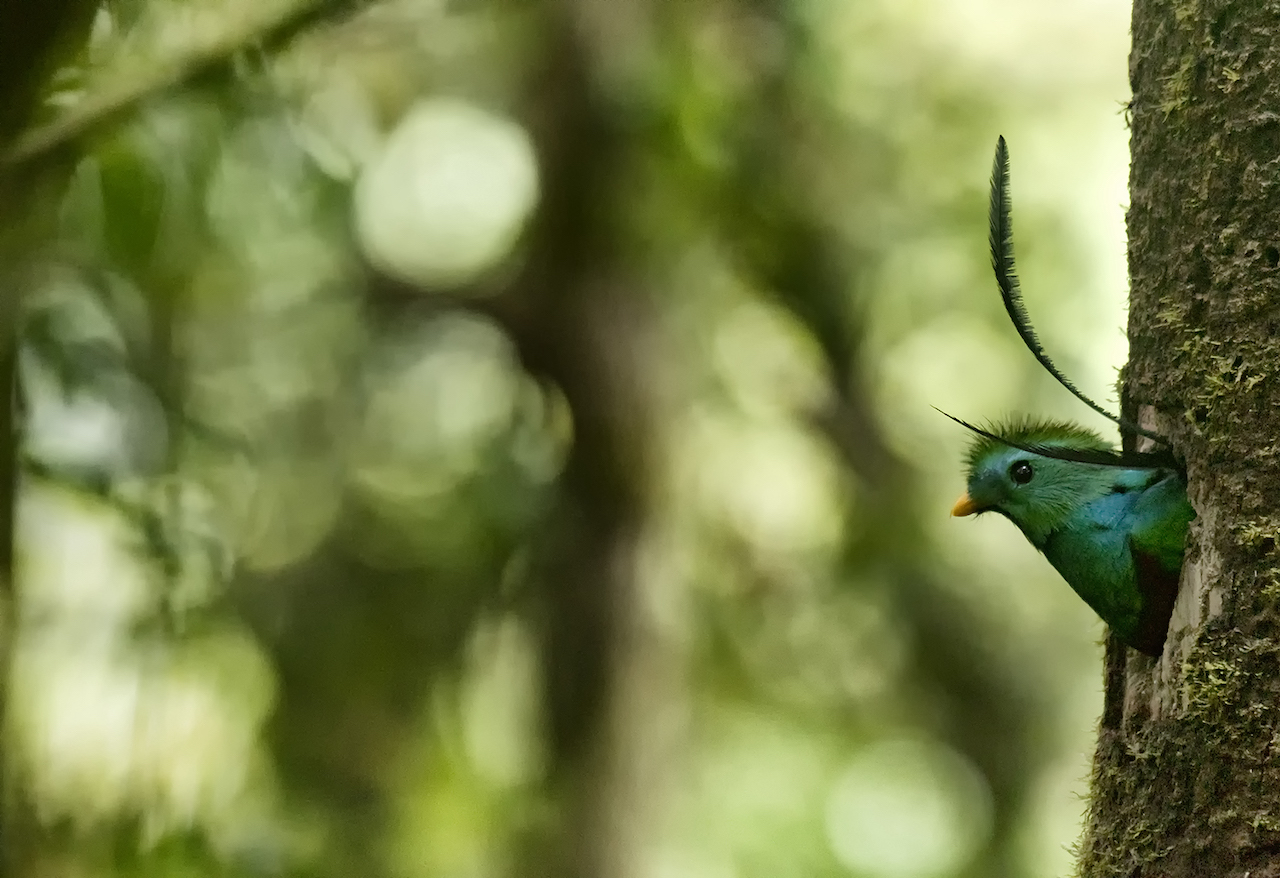 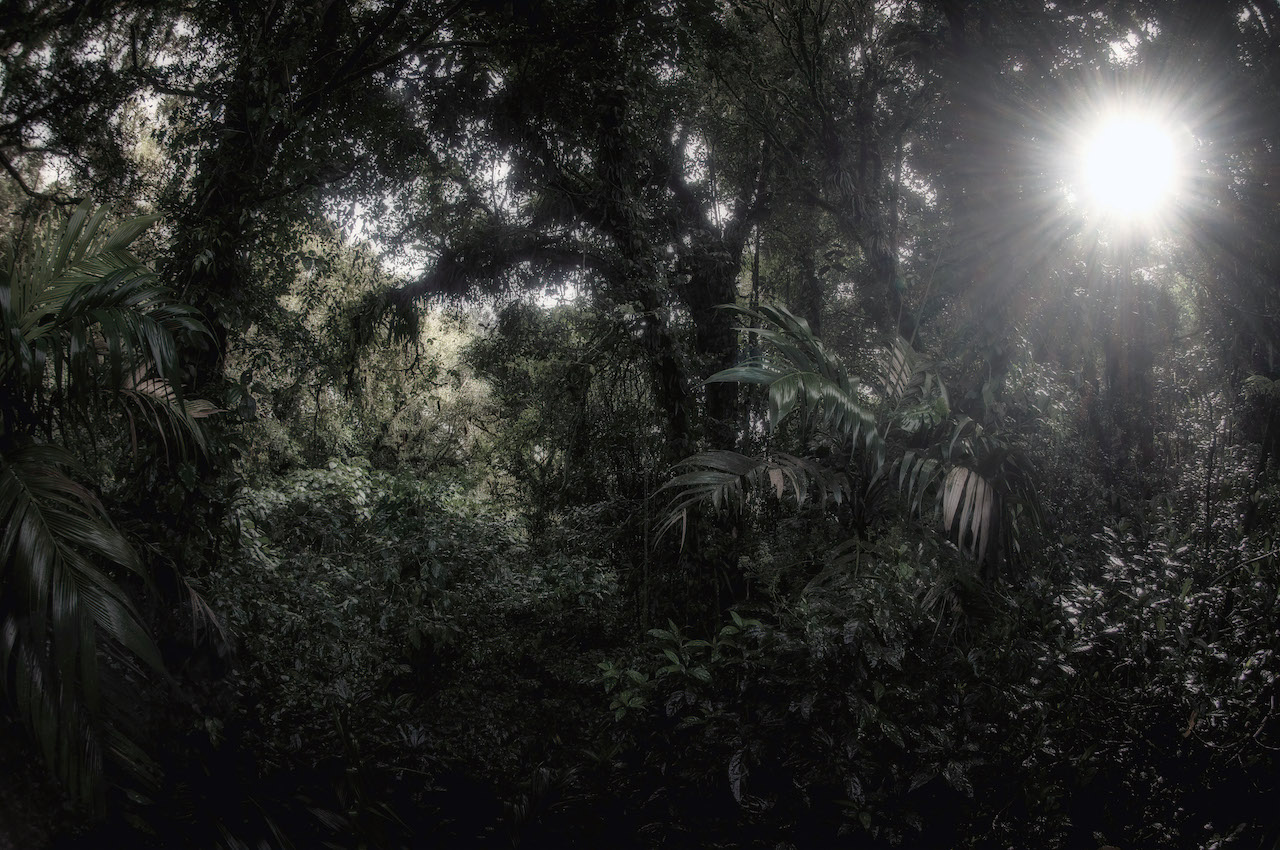 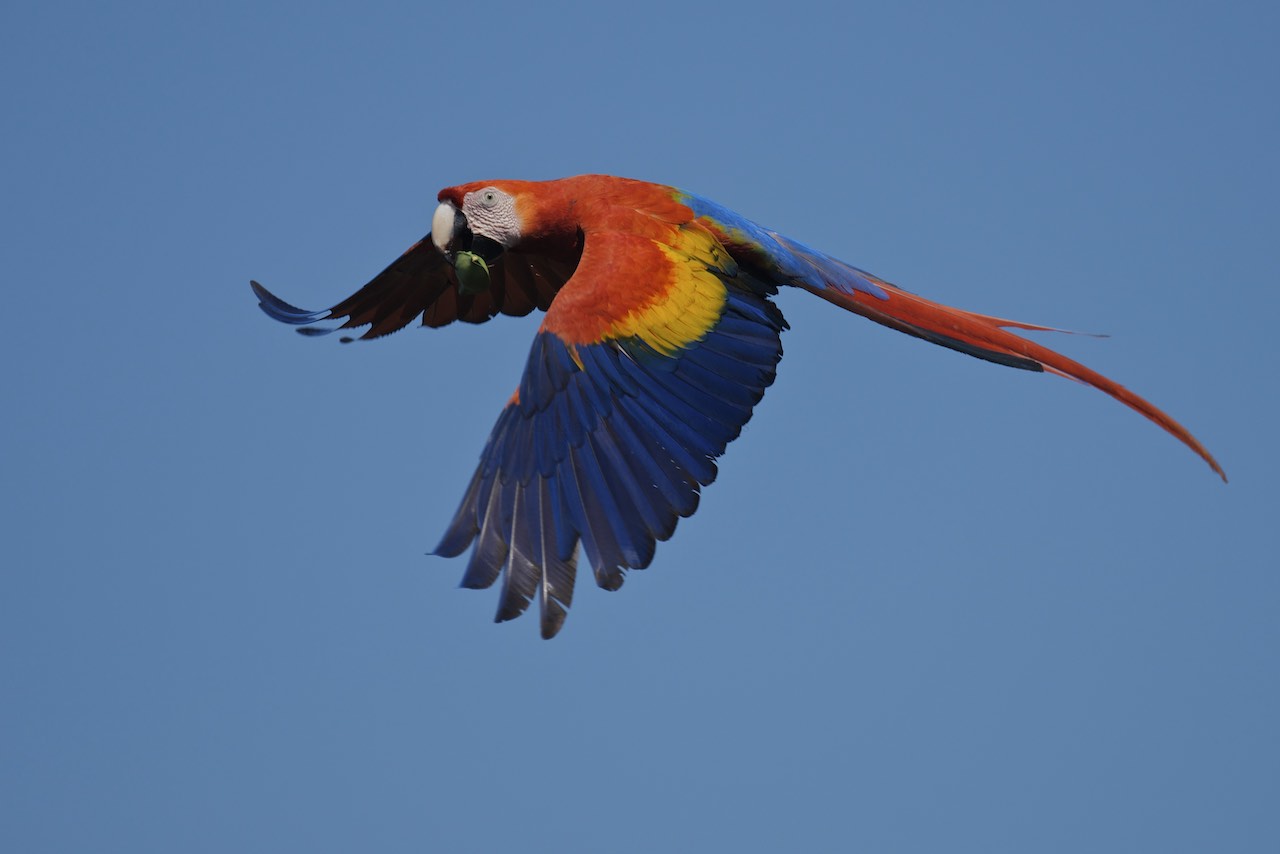 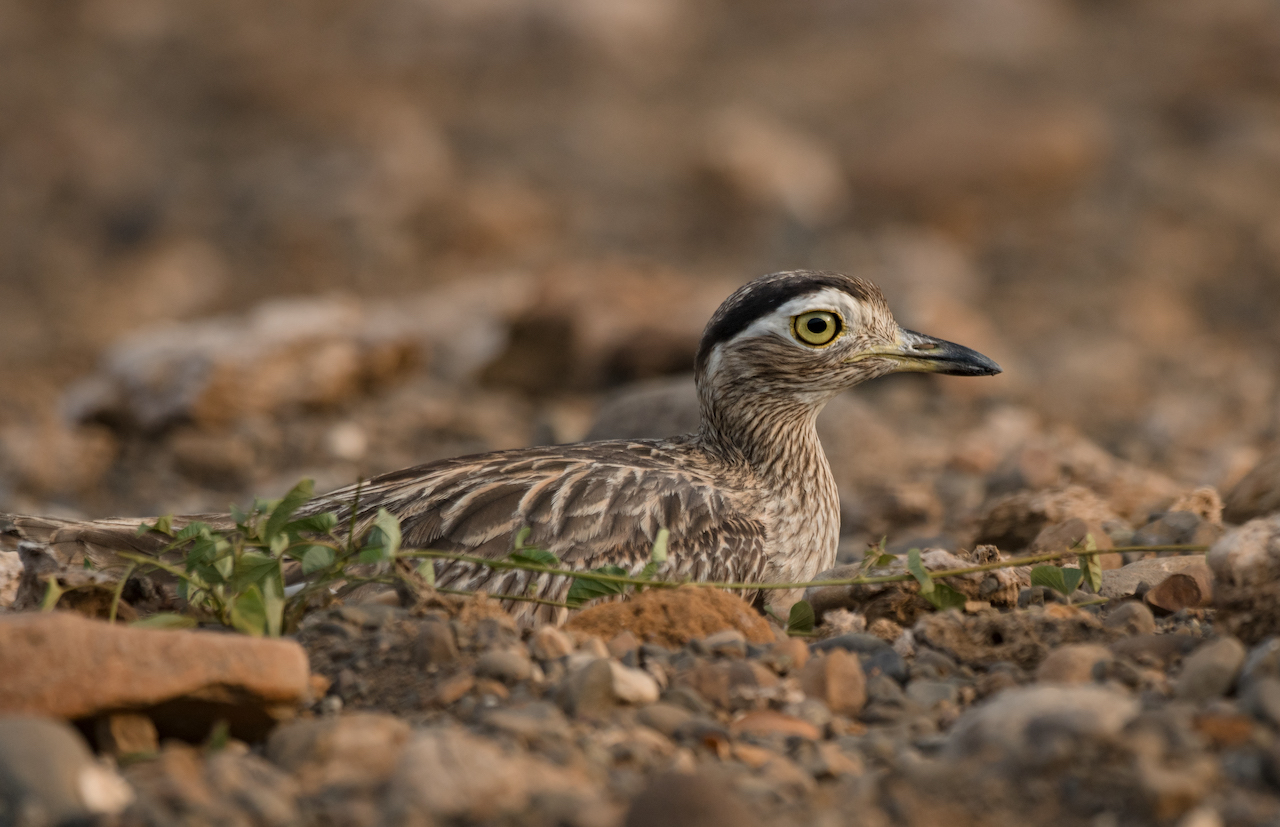 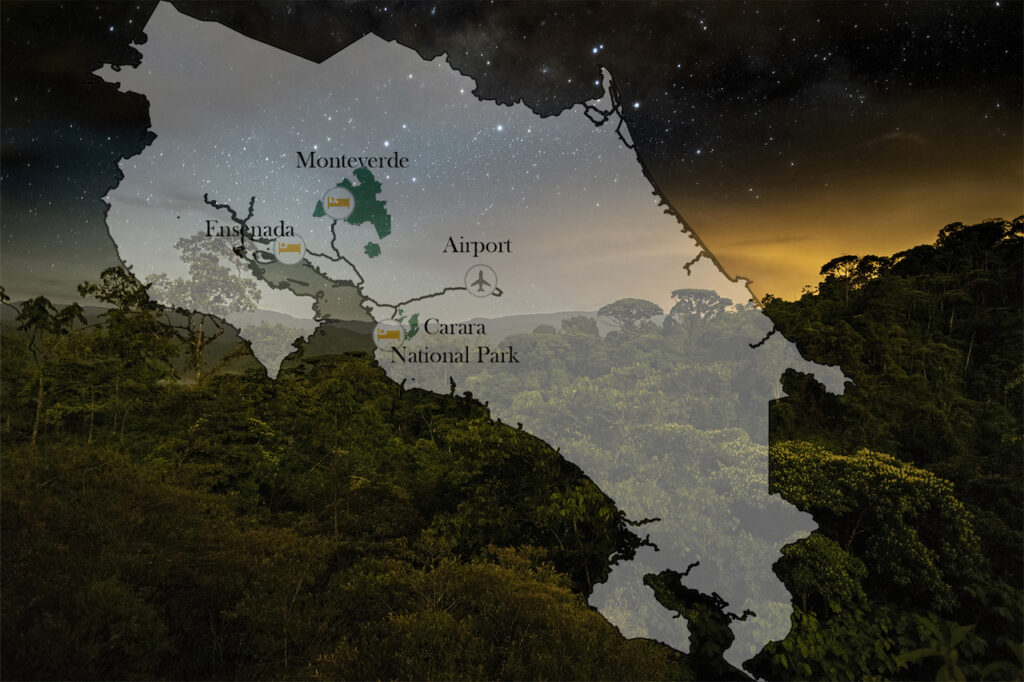 Monteverde Cloud Forest. Nestled in the Tilaran’ volcanic range and facing the dry forest of the Nicoya’s Peninsula, this world known paradise has been an icon for conservationists for decades. Blasted by the Caribbean trade winds at the top of its hills the evergreen forest of Monteverde/Santa Elena holds the one of the most astonishing biodiversity anywhere on earth due its geographical position. Over 400 species of birds have been recorded here and its adjacent preserves on the 3 major ecosystems. Home of the all mighty Resplendent Quetzal, and the weird looking Three wattled Bellbird with its unique call. Dozens of kilometers of trails to explore. Dripping wet forest with more than 400 species of orchids and gentile blown clouds enchants everyone’s eyes. There are very few places on earth so breathtaking at first glance.

Ensenada: This private reserve is an area that attracts thousands of birds during the migration from the north, and is truly birding to rave about! It is a fabulous area to find dry tropical forest specialities such as Thicket Tinamou, Long-tailed Manakin, Lesser Ground Cuckoo, and the rare Jabiru Stork. This seasonally flooded flatland with deciduous forest is full of possibilities for combination birding. Adjacent to mud flats, mangrove forest and coastline, this region provides the opportunity to see dozens of ducks and heron species, Kingfishers, Frigatebirds, and dozens of migratory species such as Turnstones, Sandpipers, Skimmers, Willets, and Spoonbills.

Carara National Park: The greatest birding destinations in the country, this incredible park boasts the second largest population of Scarlet Macaws in Costa Rica! With easy access to all trails, mangrove swamps, pasture fields and forest edges, this destination is friendly for all ages and fitness levels. There are very few places where more than a hundred species can be found on one trail, but the Meandrica trail is infamous for just that. It has become a treasured birding icon where you can seek tinamous, trogons, wrens, antpittas, manakins, cotingas, bellbirds, and Antshrikes, among others. The nearby forested edges house many open field birds, such as jays, blackbirds, greenlets, rails, ground doves, motmots, hawks, parakeets, and owls. The mangroves of the Rio Grande de Tarcoles can reward the birder with up to five species of kingfishers, as well as many other shorebirds such as herons and egrets. The most remarkable of this area are the restricted range birds of the mangroves, such as Vireos, warblers, cuckoos, flycatchers, and even the elusive Rufous Necked Wood-rail and the only true Costa Rican endemic, the Mangrove Hummingbird.

Day 1: Upon arrival and since the forest is right there at the lodge, we will explore many different trail systems or focus on the road edges searching for Guans, Bellbirds, Barbets, Flycatchers etc. During the late afternoon where most people have left the trails we will go birding at El Camino Trail and others searching for cloud forest mixed flocks or a rare glimpse of wood-quails, antpittas, leaftosser and tinamous.

Day 2: Begin birding at sunrise near the lodge where a large number of bird life is concentrated before the sun shines on the forest floors. A good opportunity to capture good views of Quetzals coming to feed on fruits at the road edges. Deeply covered canopies can be a challenge while bird watching but many rare birds occur in the shady sides. After lunch we will take a short drive of 30 minutes to an entirely new ecosystem on the drier Pacific slopes at The Ecological Sanctuary. Although it’s ridiculously close to the ever wet cloud forest it looks nothing like it. Located in the deep canyons of Cerro Plano, this dry tropical mid elevation forest is so different that it could make you feel as if you were in another country.

Day 3: We will begin early again for best results, and today’s search for Three wattled Bellbird. One of those endemic birds found nowhere else on earth (except a tiny portion of Panama), describing its call and flight displays is nearly impossible. Monteverde’s species sound nearly as a bellbird but far more metallic. Their air dances for territory and females its extremely entertaining; they are sort of loopy lops with aggressive ups and downs and back to the perch. After traveling to the right places to locate this extraordinary bird we will return back to our lodge premises to enjoy our last lunch here with dozens of hummingbirds at the local gardens.

Day 3: We will explore the nearby local spots, enjoy lunch at the lodge, and relax until 3:30 when we will birdwatch in the nearby forest.

Day 4: Begin birding at sunrise in the local swamps, marshes and forest before and after breakfast. We will be hiking on uneven terrain therefore close shoes are a must. Trails are very accessible to all yet some parts can be rocky or wet. The property is by the sea so tidal influence would have to be considered. Pastures, forested edges, dry creeks, mangroves are some of the ecosystems we will trek around.  Due to the high temperatures between 11am and 1pm, we highly suggest resting during this time and continuing again after 3pm.

Day 5: We will begin early again for best results, and today’s search will be for Collared Forest Falcon, Yellow-naped Parrots, Long-tailed Manakin, Spectacled Owl, and Lesser Ground Cuckoo before a well-deserved breakfast. After, we will explore adjacent marshes for Limpkins, Hawks, Sparrows, Seedeaters and more. After lunch we will drive to the Abangares River Mouth for long-legged birds, kingfishers and North American migrants.

Day 5: On the way to the Central Pacific.  Departure after breakfast, might be a few stops on the way for birding.

Day 6: The day will begin with a boat trip to the mangroves followed by breakfast at a local restaurant. A half hour of travel will bring us to the Tarcoles River Mangroves where we will embark on a three hour tour of river edges, deforested areas, mangrove forest and river mouths. We will find Herons, Egrets, Vireos, Hummingbirds, Frigatebirds, shore birds, Waders, Cuckoos, Macaws, parrots, hawks and search for White-throated Magpie Jay, Ferruginous Pygmy Owl, and the Black-headed Trogon. The boat tour’s main goal is to find the mangrove specialties such as Mangrove Hummingbird, Cuckoos, Vireos, Warblers, Rufous-necked Woodrail, Panama and Scrub Flycatchers, and American Pygmy Kingfisher. In the afternoon we will visit open farm lands, forest patches, river edges and more pasture fields; the goal here is to find Seedeaters, Raptors, Parakeets, Flycatchers, Lapwings, Anis, ducks and species that are no longer found at the national park due to habitat destruction.

Day 7: Breakfast on the go! As the saying goes, the early bird catches the worm so we will have an early start to visit one of the best birding sites in Central America, Carara National Park. The park holds a combination of ecosystems that allow an amazing number of endemics, birds with restricted ranges, and other rare beauties to thrive. More than 400 species have been recorded here, including Antbirds, Macaws, Hummingbirds, Euphonias, Tanagers, Flycatchers, Cotingas, Wrens, Manakins and a dozen other families. We will spend all day at the park, have lunch at a local restaurant, and dinner in Jaco Beach town.